Four young people from around the state were named the finalists in the North Dakota Farm Bureau Young Farmer and Rancher Challenge, held at the YF&R Leadership Conference in Fargo, January 27-29.

Lucas Lang of Sterling, Kevin Hall of Hoople, Brock Axness of Des Lacs and Leah Johnson of Fargo will each receive an all-expense paid trip to the 2012 NDFB Annual Meeting in Fargo next November to compete in a “traditional” Discussion Meet round with a question from American Farm Bureau.
The winner of the North Dakota YF&R Challenge will receive several prizes as well as an all- expense paid trip to compete in the AFBF YF&R Discussion Meet held during the American Farm Bureau Convention in Nashville, TN in January 2013. The winner there will receive the keys to a new pickup.
The finalists for the Challenge were chosen based on a judged 15-minute issues-discussion and a judged 2-minute videotaped interview designed to simulate a reporter’s ambush interview.
The YF&R Challenge competition is open to farmers and ranchers between the ages of 18 and 35, was designed to simulate a committee meeting in which individuals discuss issues and surface solutions to those issues and to be able to speak comfortably with the media regarding issues related to farming and ranching.
For more information on the YF&R program go to the YF&R page. 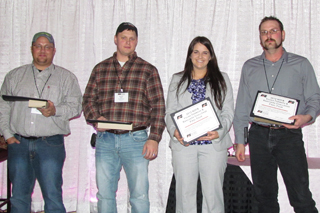