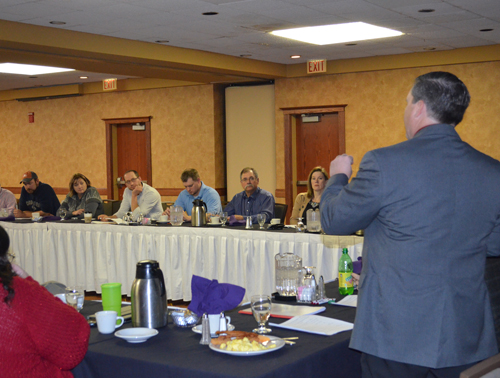 Limiting the growth of state spending and property tax reform were two of the main issue priorities established by North Dakota Farm Bureau for 2015.

“We have seen unprecedented increases in state spending since the oil boom, but it’s not sustainable spending and our members recognize that we are setting ourselves up for disaster if the state does not get a handle on these expenditures,” said NDFB Public Policy Director Pete Hanebutt.

Following the close of the NDFB Annual Meeting, held November 14-15 at the Ramkota in Bismarck, members of the organization’s Public Finance and Education Committee and Agriculture and Environment Committee met to prioritize issues. The list of priorities was then approved by the NDFB Board of Directors.

“In the recent election, voters clearly rejected measures that would have increased state spending, and our members led that charge at the ballot box,” Hanebutt said. “During our delegate meeting, our members reinforced the voters’ directive by adopting policies calling for limiting spending and focusing on property tax reform.”

NDFB will also push for more research and development of animal feeding facilities that may lead to more feeding and marketing of livestock and livestock products in North Dakota and promote the use of our feed grains and co-products.

In addition, following the drubbing of Measure 5 at the polls, members felt it was important to prioritize opposition to any increased funding for groups or organizations that come to the 2015 Legislature for additional funds for conservation projects, conservation easements and land acquisition.

“Elected officials at the Legislature and in statewide offices have a wonderful opportunity to reject reckless spending and show true conservative leadership by frugally managing state surpluses for future generations,” Hanebutt said. “There’s a huge difference between ‘wants’ and ‘needs’ and Farm Bureau members are confident our state can afford those budget outlays that are truly needed, such as infrastructure expenses, without giving away our surpluses on each and every project that special interest groups ‘want.’ ”

Hanebutt said if leaders manage our budgets properly there is no reason why taxpayers couldn’t benefit from our surpluses by being able to keep more of their own money through tax reform and relief.

“However, if the Legislature and other elected officials continue down the current road of spending surpluses to garner perceived political gain, the taxpayers in successive generations will be left paying the bills,” he said.

Other priorities included support for increased state funding for repairs and maintenance of county and township roads; support for an acre for an acre wetland mitigation process; and support for the productivity formula to value agricultural land for tax purposes.

North Dakota Farm Bureau is the most effective general farm and ranch organization in the state of North Dakota, with 27,000 members and 50 organized county Farm Bureaus.