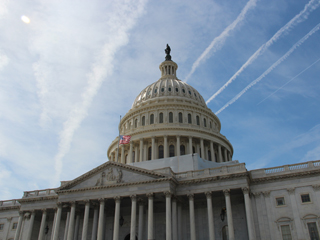 WASHINGTON, D.C. – The American Farm Bureau Federation and a coalition of agricultural and builder groups today asked the U.S. Supreme Court to review a lower court ruling that allows the Environmental Protection Agency to micromanage local land use and development decisions under the guise of implementing the federal Clean Water Act. The lower court’s ruling, according to the petition, “opens the door for a dramatic expansion of federal power” and must be overturned.

Download a copy of the petition filed by AFBF here.

The lawsuit arose in the context of EPA’s so-called “blueprint” for restoring the Chesapeake Bay, but Farm Bureau points out that the issue at stake is national in scope.

“It’s about whether EPA has the power to override local decisions on what land can be farmed, where homes can be built, and where schools, hospitals, roads and communities can be developed,” said AFBF President Bob Stallman. “This is nothing less than federal super-zoning authority. As much as we all support the goal of achieving a healthy Chesapeake Bay, we have to fight this particular process for getting there.”

Twenty-one states, 39 members of Congress and a group of counties within the Bay watershed supported AFBF’s legal challenge in the lower courts.

“We certainly hope for even more support in asking for Supreme Court review,” said AFBF General Counsel Ellen Steen. “There has been a lot of attention to EPA’s recent rule expanding its jurisdiction under the Clean Water Act. EPA’s overreach in the Bay ‘blueprint’ is just as aggressive, and its impact on communities and businesses is just as dramatic. From the beginning, this was designed as a model that would be followed around the country.”

According to today’s court filing, the greatest practical, local harm of the Bay blueprint is that it “locks in” decisions made in 2010 and “deprives state and local governments of the ability to adapt their plans to take account of changes in societal needs, developing technologies, or new information. It prevents them from exercising their own judgment about the best and most efficient ways to achieve the goals for the Bay.” Implementation of the blueprint is expected to cost roughly $28 billion to $30 billion in Maryland and Virginia alone.