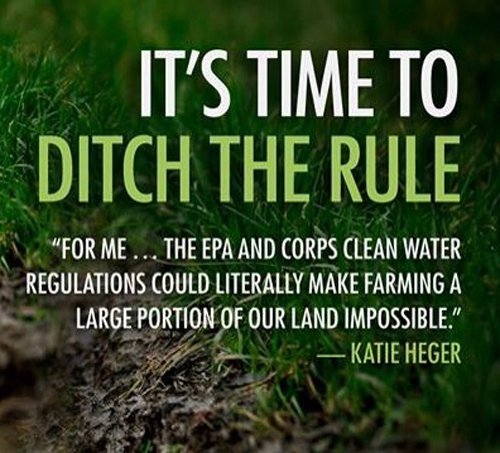 AFBF calls on EPA to ditch the Waters of the U.S. rule

WASHINGTON, D.C., – The Environmental Protection Agency’s and U.S. Army Corps of Engineers’ proposed Waters of the U.S. rule is a blatant effort to expand federal authority over land use by regulating land as if it were “water,” the American Farm Bureau Federation said today.

AFBF filed formal comments with the EPA after rallying farmers, ranchers, other regulated industries and members of Congress behind its popular #DitchtheRule campaign. EPA keeps spinning its rule to sell it to different audiences, but individual regulators won’t care about that spin when they’re out enforcing the rule, AFBF said. Agriculture clearly isn’t buying the spin, as 146 agricultural groups joined in the AFBF-led comments.

“EPA is hiding behind vague and confusing language, but that language can easily be read to regulate most any piece of land where rainwater pools or flows,” AFBF President Bob Stallman said. “This proposal is a perfect example of agencies run amok—in this case, running far past the limits set by Congress and two Supreme Court decisions.”

According to Stallman, “There’s no way to know which areas are regulated and, most importantly, which are not. That makes farmers, ranchers and other businesses and land owners vulnerable to arbitrary agency enforcement and even citizen lawsuits—regardless of any actual environmental impact of their activities.”

Farmers and ranchers know how important clean water is to all of us, and they take great pride in protecting our natural resources. But this proposal is hopelessly broken. “The agencies need to go back to the drawing board and give the public the clarity and certainty that we’ve been promised,” said Stallman.