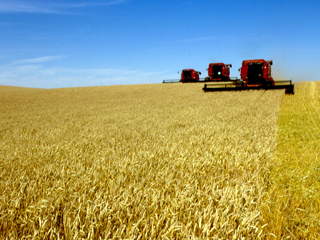 The president’s 2010 budget proposal calls for canceling NASA’s Constellation program to return astronauts to the Moon by 2020. In these tough economic times it is harder to justify sending astronauts into space.

Agriculture is earthbound for the foreseeable future. There’s no need to worry about farming on the Moon or Mars either. Meeting this world’s future needs for food, fuel and fiber is a big enough challenge for farmers and ranchers.

Before he passed away last September, Nobel laureate Dr. Norman Borlaug wrote the preface to a CAST (Council for Agricultural Science and Technology) paper on the future of global agriculture. Borlaug, the father of the Green Revolution in the mid-1960s, reminded readers that in the next 50 years we will need to produce more food than we have in the past 10,000 years.

“Now, more than ever,” he wrote, it is important for the general public to know the facts underlying the many agricultural issues influencing daily life.” That’s not an easy task in a climate dominated by job fears, rising health care costs, budget deficits and a housing crisis.

As with the economic woes, it comes down to money. The distinguished authors of the CAST report are concerned about the apparent lack of commitment by the United States and other countries to make the necessary research and education expenditures for a secure food future.

The CAST report is not a doomsday forecast. However, it says farmers will have to increase production per unit of land, water and nutrient resources to meet global food demand. Principal drivers of demand are world population growth, expectations for a higher standard of living, increases in disposable income and greater energy needs.

Farmers also face uncertainties about global climate change and government policies to address it, and the desire of the public for ecosystem services that enhance the environment.

Dealing with all this is a tall order. According to the CAST authors, “The convergence of so many challenges (in agriculture) at one time is unprecedented.” This is a sobering comment, especially when one recalls the history of American agriculture. To say that the future is going to be even more demanding of producers is a big statement.

The authors of the report believe the United States has the land resources and science capacity to equip agriculture to meet a large portion of the coming challenges, but time is running out. The typical lead time for investments in science and technology to raise agricultural productivity is 10 to 20 years.

The report cites a number of areas of scientific research, which, if successful, would improve agricultural productivity worldwide and lead to another Green Revolution, but the growth in U.S. public spending for agricultural research was a paltry 1 percent per year in the last decade. Clearly that’s not enough.

Developing the information, knowledge and technology needed by agriculture is one mission we can’t put off.

Stewart Truelsen is a regular contributor to the Focus on Agriculture series and is author of a new book marking the American Farm Bureau Federation’s 90th anniversary, Forward Farm Bureau.