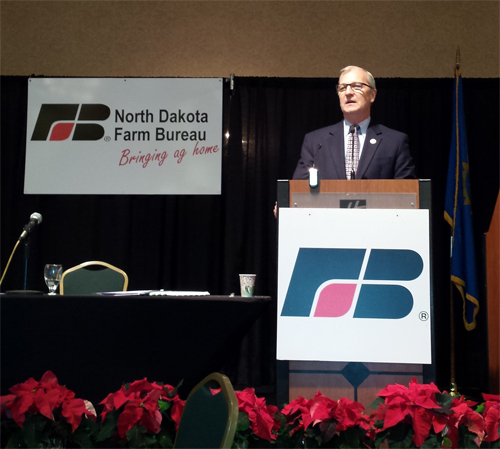 Cramer gave a detailed account of how quick action by Farm Bureau and other agriculture and crop insurance stakeholders armed him and other farm state legislators with the necessary information and grassroots support needed to fight the Obama Administration's proposal.

"When we saw the budget deal included a cut in the allowable rate of return for crop insurance agencies, a handful of us quickly formed a bi-partisan block of 50 to 60 House members and we brought leaders from both parties in both legislative chambers to the table for a reality meeting," said Cramer. "I confronted Paul Ryan about this issue and secured his personal commitment to fixing the problem by offsetting the $3 billion from another part of the budget."

"Not even during the 2014 Farm Bill debate did I see the type of unity and urgency displayed by ag leaders that I did on this issue," Cramer told the crowd.  "Ag activism is alive and well, and needs to be."

Cramer then addressed issues regarding the Agriculture Risk Coverage (ARC) program which have recently surfaced in North Dakota.  His office has received complaints regarding the lack of a five-year county average yield data for LaMoure and Logan counties, as well as payments calculated upon the county the producer administrates their farm rather than the county their crops are actually gown.

“Although a fix for LaMoure and Logan counties is still being worked out, I have received assurances from the USDA the ARC administrative county issue will be resolved,” said Cramer.  “I will continue to work with the USDA and the House Agriculture Committee on these and any other remaining issues until an equitable solution for all parties can be reached.”

Continuing on the need for farm unity and advocacy, Cramer congratulated the NDFB for its leadership in the Natural Resources Conservation Service’s (NRCS) public – private partnerships to employ farm bill biologists controversy.

In October 2014, several farm and landowner organizations contacted the Congressman’s office with concerns about a contractual arrangement where DU and Pheasants Forever, provide staff to the NRCS to give conservation advice to farmers on behalf of the government, citing undue political influence by groups whose mission may be in conflict with the landowners.  In April, Cramer facilitated a meeting in his Bismarck office between agriculture and conservation groups as an attempt to find a solution for the conflict between the NRCS, farmers, Ducks Unlimited (DU) and Pheasants Forever.  In September, the Congressman announced an agreement between agriculture groups and conservation groups over this issue.

"When others were willing to settle for the status quo, the Farm Bureau said no,” said Cramer.  “ I was honored to stand with them and facilitate a coalition of agriculture, conservation and government stakeholders to solve the problem.  We proved once again, by standing together, we really can change for the better how we do business."

Cramer also discussed the Trans-Pacific Partnership (TPP) trade agreement, increasing trade with Cuba and the President’s proposal to allow 100,000 Syrian refugees into the United States with the attendees of the NDFB Annual Meeting.