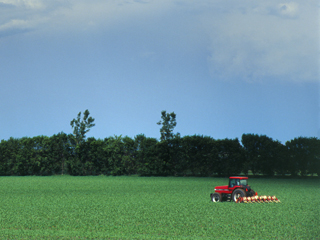 Though greenwashing is on the increase, so are efforts to define and measure the actual metrics of agriculture and food production. Ag and food supply chain efforts to measure environmental sustainability began in earnest in 2006, launched by major retail grocers, restaurant chains and processors.

Field to Market: The Alliance for Sustainable Agriculture, started in 2013, helps farmers measure the environmental impacts of agricultural production, track their continuous improvement efforts, and link their progress to others in food and fiber supply chains. The American Farm Bureau is among more than 70 members of the Field to Market consortium.

Beyond those initiatives and largely invisible to the public, U.S. agriculture has improved continuously on its measurable environmental impacts for the past 30-40 years. Farmers are cutting back on soil erosion and reducing greenhouse gasses thanks to more efficient methods and new technology.

While deep tillage—using an old-fashioned plow to control weeds and prepare land for planting—was the norm in the U.S. for decades, no-till and conservation tillage now account for 62 percent of U.S. croplands. Deep tillage, which requires a lot of diesel fuel, was a significant source of soil erosion and a major factor contributing to the “dust bowl” of the 1930s. Reducing tillage not only helps prevent soil erosion but also cuts back on greenhouse gas emissions.

Herbicide-resistant or tolerant crops, many developed through genetic modification, are important tools in reducing tillage, as they make weed control more effective and less costly. Herbicides used in no-till are less toxic and less likely to persist in the environment, and can be used at lower levels. In 2012, the environmental impact of GMO cultivation was equal to removing 11.9 million cars from the road for a year.

U.S. agriculture is also making great strides toward reducing the impacts of livestock production. Every day an animal is alive, it eats, drinks, belches, passes gas and produces liquid and solid wastes. Through increased productivity and efficiency, impacts per unit of meat or milk have been reduced dramatically.

While both grass- and grain-fed beef products are tasty and nutritious, “grass-fed” beef animals take longer to reach a finish weight that is usually much lower than grain-finished animals. Grain-finished animals produce enough extra beef to meet the needs of two consumers for a year – in 226 fewer days – and with lower greenhouse gas emissions than their grass-fed counterparts, even accounting for feed production. Through efficient breeding and production practices farmers and ranchers helped the beef industry decrease its carbon footprint per unit of meat by more than 16 percent.

In addition, U.S. farmers have enrolled nearly 30 million acres in various conservation reserve programs – about one-third the size of lands covered by the country’s national parks.

Through efficiency and technological advancement, U.S. farmers produce more than 260 percent more food than they did in 1950, with 2 percent fewer inputs, for a population that has more than doubled -- all while reducing greenhouse gasses and waste output and preserving natural resources. Consumers in turn can feel good about any choices they make, regardless of whether a product sports a “green” label.