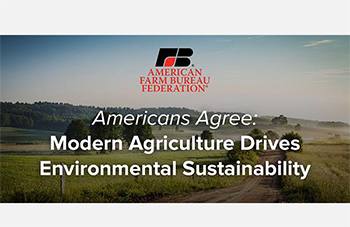 Sustainability: From the notion of a modern farm or ranch being economically able to sustain a family, to the idea of working with the land in a manner that supports food and fiber production for future generations, the word means different things to different people. Even in agricultural circles, definitions of sustainability run far afield, from the environment to economics.

A recent Morning Consult poll asked 1,917 registered voters to give their opinions regarding agriculture and sustainability. One definition of sustainable agriculture was offered, generally, as defined by the 1977 and 1990 farm bills, a system of agriculture that will satisfy human food and fiber needs, enhance environmental quality, use resources efficiently, sustain the economic viability of farmers and benefit society as a whole.

Almost everyone supports sustainability, by one definition or another. And, while the background noise around this discussion might sometimes suggest otherwise, many Americans think agriculture and farming are among the nation’s most sustainable sectors.

Sustainability, not a Red or Blue Issue

Democrats and Republicans actually agreed on many points in the survey.

Fifty-nine percent of respondents said they trust farmers to make the right decisions when it comes to sustainability, while just 24 percent wanted government to make the call. Seventeen percent said they did not know or had no opinion. Across party lines, the majority of respondents expressed trust in farmers over government mandates, with Republicans at 67-18, Democrats at 55-30 and Independents at 55-23.

By nearly a five-to-one margin, respondents said cooperative incentives would boost environmental sustainability in agriculture over additional government regulations – 62 to 13 percent. Again, there was agreement across party lines, with 65 vs. 13 percent of Republicans and 63 vs. 15 percent of Democrats favoring incentives.  More respondents (46 vs. 26 percent) said additional government regulations would hurt sustainability on American farms rather than improve it.

Agriculture also drew the highest marks when respondents were asked whether it was more “good” than “bad” regarding environmental sustainability – 56 percent said good, 13 said bad, 19 percent said equal and 11 percent did not know or had no opinion. The technology industry came in second with 47 percent good and 15 percent bad.

A whopping 80 percent of respondents said they strongly or somewhat agreed with the statement that “the true success of an environmentally sustainable farming practice depends on whether that practice also leads to economic opportunity for the farmer.”

The public “gets” it, even if zealots don’t. America’s farmers and ranchers need to build on that reservoir of trust by sharing their stories of what really happens in the countryside. They need to explain the in-the-field work they are doing to protect natural resources while providing for their families. Americans trust you. Show them why they should continue to do so.