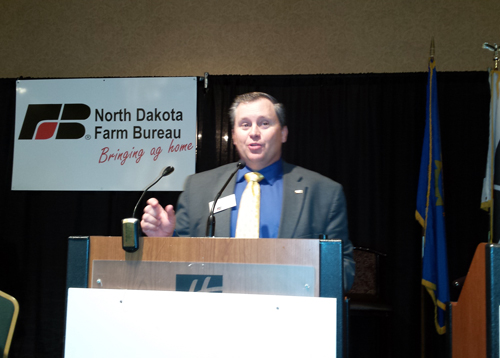 Delegates to the 73rd North Dakota Farm Bureau Annual Meeting elected Daryl Lies of Douglas to a two-year term as the organization’s president.

“It’s a pleasure and an honor to be elected to serve as your next president of North Dakota Farm Bureau – the greatest organization that advocates for our constitutional rights, our property rights,” Lies said following his election. “I will lead with the best interests of our beliefs and philosophical principals into the future.”

Lies was elected to the NDFB Board of Directors in 2013 representing District 6. He and his wife, Kim, have two children and raise hogs, sheep and goats with an emphasis in show animals. Until his election as president, Lies also served as the agricultural liaison for Representative Kevin Cramer.

Nathan Fegley of Berthold was elected to fill out Lies’s unexpired term on the NDFB Board. Fegley and his wife, Katie, have three children and raise small grains and operates Fegley Grain Cleaning, Incorporated.

Chris Brossart of Wolford was re-elected as vice president. He was also elected to a third, three-year term representing District 4 on the NDFB Board. Brossart and his wife, Jennie, have two children and raise spring and winter wheat, canola, barley, soybeans and pinto beans.

In other election news, Dana Kaldor of Hillsboro was elected to a three-year term as the District 2 representative on the NDFB Board of Directors. Dana and his wife, Dawn, have three children. They raise soybeans, corn and wheat. Kaldor replaces John McConnell of Casselton who was ineligible to run for another term.

Kirk Olson of Arnegard was re-elected to his second three-year term representing District 8 on the board. Kirk and his wife, Heidi, have two children and raise small grains and pulse crops.

Val Wagner of Monango was re-elected as Promotion and Education Committee chairman. The committee chairman holds a position on the NDFB Board of Directors. Val and her husband, Mark, have a Simmental and Red Angus commercial beef farm and raise corn, soybeans, wheat and alfalfa hay. The Wagners have four children.

Elected as Young Farmer and Rancher Committee chairman is Craig Vaughn of Cavalier. The chair of the YF&R Committee holds a position on the NDFB Board of Directors. Craig and his wife, Kelly, farm in partnership with Craig’s father and brother, raising corn, soybeans, wheat, alfalfa and purebred registered Limousin cattle. The Vaughns have one child.