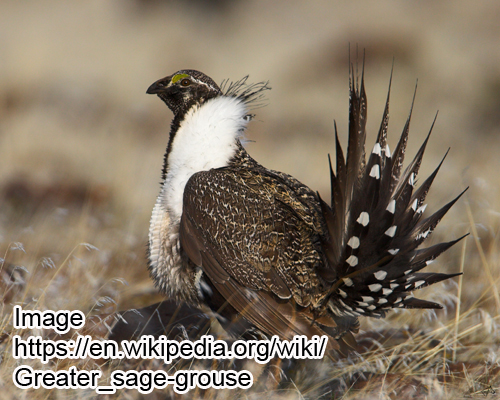 State and local conservation efforts have kept the Greater Sage Grouse from being listed as an endangered species.

“Bowman County Farm Bureau was a leader in North Dakota on local sage grouse conservation efforts. It’s nice to see USFWS acknowledge the importance of local relationships and how they can improve conditions much more than any federal action can. Through grassroots efforts and decisions, bird populations rebounded. Local common sense prevailed where federal regulators missed the mark,” Hanebutt said.

Last year, when the bird was being considered for listing, farmers and ranchers across the country asked that USFWS give the locally developed conservation plans time to work, said American Farm Bureau Federation President Bob Stallman.

“Now we’re seeing positive results and real success with the birds’ populations across the Western states. State, local and industry partners have accomplished in just a few years a level of success largely unseen through 42 years of federal Endangered Species Act implementation.”

Hanebutt says that, contrary to what some agencies would have you believe, sage grouse and cattle can peacefully coexist in the same habitat. “Through well-thought-out livestock management and grassland management, ranchers are able to raise both cattle and sage grouse on their land.”

Unfortunately, the Bureau of Land Management and USDA Forest Service also announced that they will move forward with land management plans which address sage grouse populations across the birds’ 184 million acre range.

“These plans add new land use restrictions which could impact how ranchers operate by limiting or eliminating permitted grazing and dictating when and where ranchers can graze their cattle, which will not necessarily be in the best interest of the rancher, the livestock, sage grouse or the land,” Hanebutt said.

Stallman said the decision is confusing. “These new plans send a mixed message by punishing livestock permittees who are already working to conserve species and resources.”