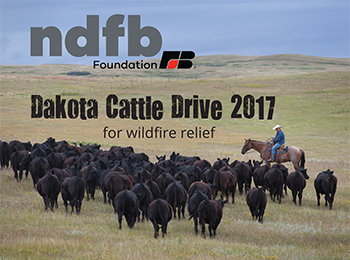 The NDFB Foundation and county Farm Bureaus raised over $151,000 in wildfire relief for Colorado, Kansas, Oklahoma and Texas.

One hundred percent of the proceeds will go to the victims of the wildfires.

The relief efforts were part of NDFB’s Dakota Cattle Drive 2017. Heifers were donated by ranchers and auctioned off with the help of sale barns across the state. The auctions took place in Rugby, Devils Lake, Mandan, Napoleon and Dickinson. Individual donations were also accepted.

“Coming together in a time of need was seen across the state during the NDFB Dakota Cattle Drive 2017,” said NDFB President Daryl Lies. “Members and friends of NDFB gave generously to provide funds to assist those impacted by the wildfires, proving once again rural America is the greatest place on earth.”

The March wildfires burned more than 1.3 million acres of land and thousands of cattle died in the fires. Many farmers and ranchers lost their livelihoods.

“Now we can provide a little silver lining in the gray cloud of devastation endured by farmers and ranchers in those four states. Thank you to everyone who helped make this effort a success,” said Lies.

For more information and photos of the auctions, go to www.ndfb.org/cattledrive.