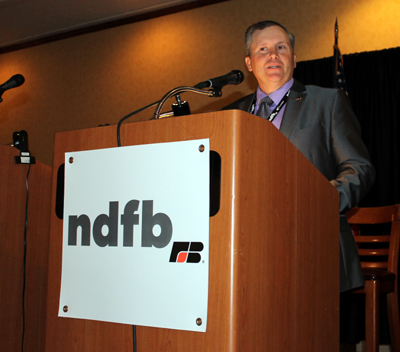 NDFB members gathered to celebrate the 76th Annual Meeting, November 9-10, 2018 in Bismarck at the Ramkota Hotel and Convention Center. The annual meeting kicked off Friday afternoon with NDFB President Daryl Lies addressing the false claims made from the Attorney General about the corporate farming law suit.

“While the state and interveners claim an overwhelming victory, it was far from it,” Lies said. “In fact, we prevailed on numerous motions. The judged called many of Farmers Union, Dakota Resource Council and the Attorney General’s claims unpersuasive, meritless and then dismissed them.”

Instead of striking down the law in its entirety, however, the judge severed part of it – claiming he corrected the law by doing so.

“Because the motion for judgment doesn’t strike down the law in its entirety, we are working with our attorneys to determine how to proceed.”

“The idea that only the way ‘I’ think farming or ranching should be done or who is or is not a farmer has to go away,” Lies stressed. “Maybe you farm a few acres of specialty crops or many acres of conventional crops. Maybe you have a handful of livestock or several thousand head. Regardless of size or method of growing, you are important to agriculture.”

Food zealots are those who portray modern agriculture practices as a way to harm the public. Lies said the misinformation being treated as “news” must be corrected. That means more farmers and ranchers need to share their stories and be willing to explain why they are doing what they do to those who ask.

“Right now, the area where we see the biggest wedge is in animal agriculture and it is a shame. There is so much opportunity and yet some of our laws -- and yes, even some of us -- are standing in the way. To stand in the way creates a path of destruction, and it flies in the face of what we as Americans and members of NDFB believe in: freedom, opportunity, and self-reliance,” he said.

“The fix for an aging farmer and rancher population starts with each of us. We must advocate for the expansion of agricultural opportunities in our state. NDFB will continue to stand up for North Dakota agriculture.”

The annual meeting will continue through Saturday, with an evening banquet and a visit from U.S. Senator-elect Kevin Cramer.