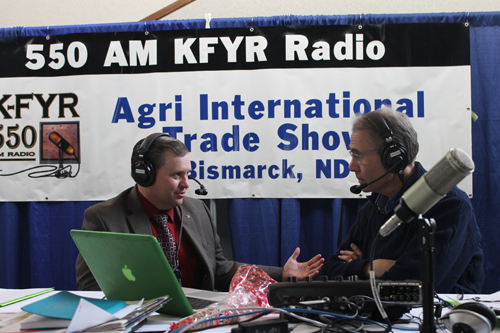 NDFB President Daryl Lies of Douglas was featured on the What's on Your Mind broadcast on Tuesday at the KFYR Radio Agri-International show, held at the Bismarck Events Center.

Lies talked about his first three months holding the position of the orgniazation's president, and a variety of issues, including over-regulation as it relates to conservation.

"There is this thought out there that conservation and agriuclture are separate things. They're not. The original conservationists are the ag folks, the farmers out there. And they care about their land. They're going to do things that are going to keep the land productive for themselves, for their kids, their grand kids. We've got farms that are multigenerational. And they didn't get that way by not caring for the resources.

"We don't need the overreach of a national regulation or a national organization telling us what to do in our state.We need to direct that conversation from within our own borders," he said.