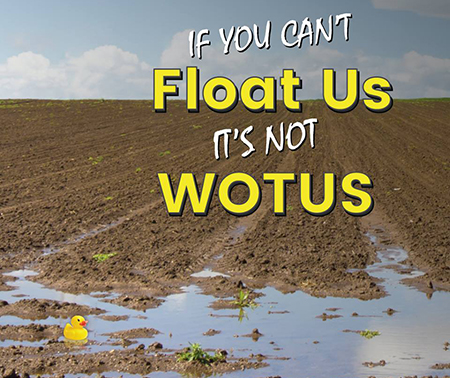 September 12, 2019 – Repeal of the 2015 Waters of the United States rule is a victory for clean water and clear rules, according to NDFB.

“As farmers and ranchers, we share the goal of ensuring our land and water is viable for future generations,” said NDFB President Daryl Lies. “The 2015 Waters of the United States rule was unreasonable and unworkable. It made conservation more difficult and created huge liabilities for farmers and every rural community.”

The administration’s repeal announcement follows a multi-year effort by the American Farm Bureau, state Farm Bureaus and an array of allies to raise awareness of overreaching provisions of the rule.

“Rules and regulations will never make everyone happy and from agriculture's perspective, the 2015 WOTUS rule was extremely problematic,” Lies said. “We're pleased to count the repeal of WOTUS as a victory for rural America. NDFB will continue working to ensure North Dakota farmers and ranchers are able to care for their land while doing what they have always done, providing food while protecting the land and water for generations to come.