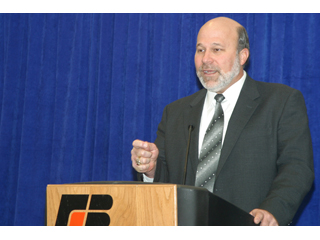 Stallman will not seek reelection

WASHINGTON, D.C., July 14, 2015 – American Farm Bureau Federation President Bob Stallman announced today that he will not seek reelection in January 2016 following 16 years at the helm of the nation’s largest, most influential general farm organization. Stallman, a cattle and rice producer from Columbus, Texas, is the 11th president during AFBF’s almost 97-year history.

“It has been a tremendous honor to serve the nation’s Farm Bureau members and represent agriculture and rural America,” Stallman said. “After 16 years as AFBF president, six as Texas Farm Bureau president and several more in other Farm Bureau roles, it is time to hand over the reins of leadership—a decision that is made easier by knowing the great leadership and foundation that exist to continue moving Farm Bureau forward. I am as optimistic as ever about the future of American agriculture and Farm Bureau.

“On the wall of the AFBF office is a quote by President Thomas Jefferson: ‘Agriculture is our wisest pursuit because it will in the end contribute most to real wealth, good morals and happiness.’ I couldn’t agree more, and I would add that a most rewarding pursuit is working for the men and women who make up American agriculture. I feel fortunate to have had the opportunity to do so.”

AFBF has thrived under Stallman’s presidency. Farm Bureau membership nationwide has grown by more than 1 million member families. Programming has grown to include more efforts to build rural communities and economies and more leadership development programs to help farmers and ranchers become advocates for agriculture and citizen leaders in their communities. AFBF has grown organizationally, particularly with the acquisition of the IDEAg farm events and publications business in 2013. And AFBF has grown in its effectiveness as an advocate in the courts for farmers’ and ranchers’ freedom to operate, and it remains the most visible, influential voice in the nation’s capital for farmers and ranchers of all types, sizes and regions.

“While the presidential gavel will change hands, what defines Farm Bureau will remain the same: our grassroots strength and our commitment to strengthening America’s agricultural and rural communities,” Stallman added.

In addition to his Farm Bureau roles, Stallman has served on numerous boards and federal and state committees, including the White House Advisory Committee for Trade Policy and Negotiations, the State Department’s Advisory Committee on International Economic Policy, the Farm Foundation board of trustees, the board and founding leadership of the U.S. Farmers and Ranchers Alliance, the board of the Council for Agricultural Science and Technology and the House Agriculture Committee’s Commission on 21st Century Production Agriculture.