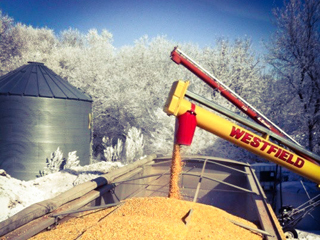 "A lot of wetter-than-normal corn went into storage last fall, and wet corn is more prone to crusting or creating a wall of grain near the grain bin wall," he says. "This increases the potential for bin unloading problems and getting trapped by the grain."

Bridging occurs when the kernels stick together and form a crust. A cavity will form under the crust when grain is removed from the bin. However, the crust isn't strong enough to support a person's weight. Bridging also transfers more of the load to the bin wall, which may lead to bin failure as the bin is unloaded.

* Never enter a bin while unloading grain or to break up a grain bridge. A wall of grain can collapse without warning and cover a person. Flowing grain will pull a person into the grain mass, burying the individual in a few seconds.

* Try breaking up a grain wall or other large mass from the top of the bin or through the bin door with a long pole on a rope. Do not remove more of the wall in the door than necessary to insert the pole because the grain may crash into the wall or flow out the door.

* Do not allow people to work around stored grain until they are warned about the hazards.

* Never enter a grain bin without stopping the auger and using the "lock-out /tag-out" procedures to secure it. Use a key-type padlock to lock the auger switch in the "off" position.

* Never enter a grain bin alone. Have at least two people at the bin to assist in case of problems. Use a safety harness or line when entering a bin.

Here is what to do if someone gets trapped:

* Shut off all grain-moving machinery to stop the flow of grain.

* Ventilate the bin using the fan.

* Don't try to pull out anyone engulfed in grain up to the waist or higher. The grain exerts tremendous pressure on the body, so pulling a person out could damage his or her spine.

* Cut holes in the bin's sides to remove grain if the person is submerged. Use a cutting torch, metal-cutting power saw or air chisel to cut at least two V- or U-shaped holes on opposite sides or more holes equally spaced around the bin. A bucket on a tractor also can open holes rapidly. Grain flowing from just one hole may injure the trapped person and cause the bin to collapse.

For more information, check out the NDSU publication "Caught in the Grain." It's available online at http://tinyurl.com/caughtingrain.

If the grain flow stops when you're removing grain from the bin but the grain surface has a funnel shape and shows some evidence that grain has been flowing into the auger, a chunk of crusted grain likely has become lodged over the center sump and is blocking the flow. Grain handlers have had some success in breaking up the chunk with a Roto-Rooter type device. Hellevang recommends following these steps:

* Run a heavy cable inside a pipe with an elbow at the end.

* Attach cable clamps on the end of the cable that will be in the center of the bin.

* Slide the pipe with the cable through the take-out tube to the center of the bin.

* Use a large drill to turn the cable while pushing it into the chunk of grain above the center sump.

If the grain is "frozen" together and does not flow from the bin, warming the grain to just above freezing with a heater and the aeration fan has been somewhat successful. Do not allow the heat from the heater to flow directly onto the fan motor or fan bearings because the fan motor relies on cool air flowing over it to keep it cool, and the heat may damage the bearings.

The warm air will pick up moisture from the corn as it heats the corn, which will condense on cooler corn in the bin and increase the moisture content of the cooler corn. Operate the aeration fan long enough to remove this moisture, and remove the corn soon after warming it.

Bin vents may frost or ice over if fans are operated when the outdoor air temperature is near or below freezing, which may damage the bin roof. Open the fill or access cover during fan operation to serve as a pressure relief valve.

Another potential safety hazard is ice accumulation on fans. This can lead to imbalance and vibration. Fans have disintegrated because of ice buildup.

Hellevang recommends producers monitor fans for ice accumulation and remove the ice if it builds up.