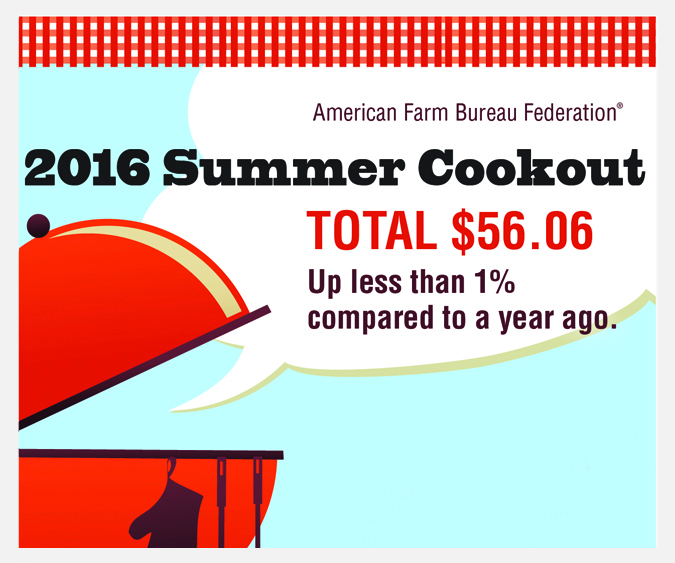 WASHINGTON, D.C., June 27, 2016 – A cookout of Americans’ favorite foods for the Fourth of July, including hot dogs, cheeseburgers, pork spare ribs, potato salad, baked beans, lemonade and chocolate milk, will cost slightly more this year but still comes in at less than $6 per person, says the American Farm Bureau Federation.

Farm Bureau’s informal survey reveals the average cost of a summer cookout for 10 people is $56.06, or $5.61 per person.

Although the cost for the cookout is up slightly (less than 1 percent), “Prices in the meat case are starting to look better from the consumers’ perspective,” said Veronica Nigh, an AFBF economist. “Retail ground round prices are trending lower,” she noted, pointing to the nation’s cattle inventory and commercial beef production, which continue to rebound from dramatically low levels in 2014 and 2015.

In addition, “On the pork side, commercial production also continues to grow and is at the highest level in 25 years,” Nigh said. Spare rib prices are about the same as a year ago, while the amount of product in cold storage is up 121 percent, Nigh pointed out. “This is helping mediate the normal seasonal upswing in spare rib prices we typically see around the July 4th festivities,” she said.

Commenting on factors driving the slight increase in retail watermelon prices, Nigh said, “While watermelons are grown across the U.S., most come from four states – Texas, Florida, Georgia and California – which together produce approximately 44 percent of the U.S. crop. Shipments of watermelons are down nearly 8 percent compared to the same time period last year,” she said.

Nigh said the increase in the price of cheese slices highlights the spread in prices that often occurs between values at the farm, wholesale, and retail stages of the production and marketing chain.

A total of 79 Farm Bureau members (volunteer shoppers) in 26 states checked retail prices for summer cookout foods in mid-June at their local grocery stores for this informal survey.

The summer cookout survey is part of the Farm Bureau marketbasket series, which also includes the popular annual Thanksgiving Dinner Cost Survey and two additional surveys of common food staples Americans use to prepare meals at home.
The year-to-year direction of the marketbasket survey tracks closely with the federal government’s Consumer Price Index report for food at home. As retail grocery prices have increased gradually over time, the share of the average food dollar that America’s farm and ranch families receive has dropped.

“Through the mid-1970s, farmers received about one-third of consumer retail food expenditures for food eaten at home and away from home, on average. Since then, that figure has decreased steadily and is now about 17 percent, according to the Agriculture Department’s revised Food Dollar Series,” Nigh said.

Using the “food at home and away from home” percentage across-the-board, the farmer’s share of this $56.06 marketbasket would be $9.53.

AFBF is the nation’s largest general farm organization with member families in all 50 states and Puerto Rico. Learn more at http://facebook.com/AmericanFarmBureau or follow @FarmBureau on Twitter.